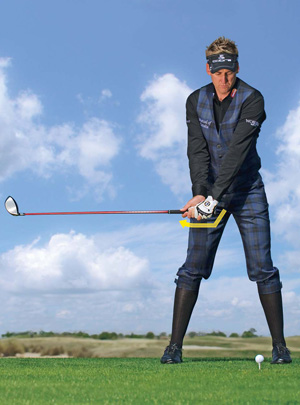 Every now and then I have a tendency to let my drives leak to the right of my target. It’s a problem that comes in part from being a fraction laid off at the top of my swing. Being laid off means my clubshaft is pointing well left of my target when I finish my backswing, instead of parallel with the target line. My club has actually been laid off all my life, and I believe this hurts my accuracy. So I’m working to get the clubshaft on line at the top.

One way I help myself get into a better position is to hinge my wrists early in the backswing. I do it as soon as I take the club back, rather than waiting until I’m nearly at the top of the swing like many golfers do. The early hinge gives me a nice feeling that the clubshaft is pointing where it should at the top. It’s one less thing to worry about when I have to put it in the fairway.