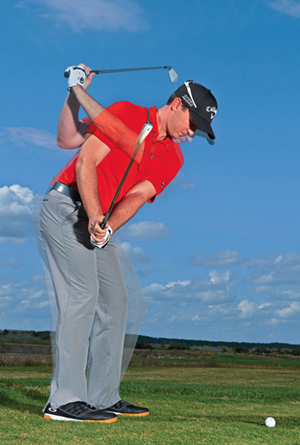 Over four decades of teaching this game, I’ve come to realize that the majority of golfers struggle to consistently play well because of issues with the backswing. For most, the conventional backswing is difficult to master and repeat, and when it goes bad, so goes the ability to synchronize the arms and the body during the swing—the most important factor in hitting consistent golf shots. If the synchronicity is off, the downswing becomes a rescue mission to get the clubface squarely on the ball. Top players through talent and practice can get by with compensations, but most golfers, if they aren’t in sync, really struggle.

Knowing this, I set out to find a way to make the move to the top simpler, more efficient and easier to repeat, so the downswing could be largely a reactionary event. After all, the downswing happens in the blink of an eye. If you can get into a good position at the top, you’ll have a much better chance of being in a good position when the clubhead meets the ball.

It took several years to conceive, study, design, refine and test—including putting it through the paces at a biomechanist’s lab—but I’m happy to say I’ve developed a new way to swing that does make the backswing simpler. And that helps improve the efficiency of the entire motion. I’m convinced this new technique will help a great many people play better golf. I call it the A Swing.

The „A“ stands for „alternative,“ because it’s great for players struggling with the conventional swing. My new book, The A Swing: The Alternative Approach to Great Golf, details what makes the swing effective and how easy it is to implement. In the meantime, I wanted to give you, the Golf Digest reader, a preview of what it’s all about. I’ve had a long relationship with this magazine, and golf aficionados like you are a big reason I still find joy in teaching and coming up with better ways to play the game.

Great players of the past have displayed traits of the A Swing. In fact, it’s a culmination of what I’ve learned during my entire career. It borrows from things I used to discuss with world No. 1s Nick Price and Nick Faldo, as well as current players, like Lydia Ko. It also stems from studying the motions used in other sports, such as baseball and tennis. And as I mentioned earlier, there’s real science behind it.

So now that we’ve got the drumroll out of the way, let’s look at the A Swing. If you’re struggling, give it a try. You might just find your A game with the A Swing.

THE A SWING STARTER KIT

To perform it correctly, the A Swing requires a special grip. I call it the prayer grip. Why? If you hold the club up with this grip so the shaft is pointing to the sky, the hands and wrists should have a symmetrical, slightly cupped look—like you’re praying. This grip allows you to hinge and cock the wrists without rotating the clubface open going back and to generate maximum speed at impact as you release the right hand. You can hold the club with an interlocking, overlapping or baseball grip. Here’s what you need to do:

1. Set the handle of the club diagonally across the fingers and just into the palm of the left hand. The grip should sit against the crook of the forefinger. The first knuckle should protrude as if resting on a trigger.

2. Now put the right hand on top of the left so the lifeline in the right palm covers the left thumb. Wrap the fingers of the right hand around the grip, and let the right forefinger separate a touch from the middle finger so it also appears to be on a trigger. The thumbs should be parallel to each other and appear stacked.

4. Hold onto the club lightly (estimate a 3 or 4 on a scale of 1 to 10, with 10 being the tightest). Sense almost no pressure on the middle section of the grip. But feel a little squeeze with your fingers at the top and bottom.

PRACTICING THE PIVOT
How the body winds going back and unwinds as the club moves down and through impact is the lifeblood of the A Swing. It’s the key to synchronization, and being in sync is what makes the A Swing special. The body creates energy, then sequentially passes that energy to the arms, hands, club and finally to the ball. The easiest way to learn how to pivot is without a club, because it focuses your attention on how the body should move and not what’s going on with the swinging elements. Follow these steps:

1. Get into the address posture without a club, and rest the hands on the sides of the stomach as if giving yourself a hug. The spine should be tilted slightly away from the target.

2. Simulate the backswing while keeping the arms folded. As the upper body winds back and you feel pressure building in the right heel, the left shoulder tilts toward the ground and the right hip rises slightly.

3. Transition into the downswing by unwinding the lower body toward the target with a slight lateral shift as you are still winding the torso away from the target. Feel the body weight move to the front part of the left foot.

4. Just like in a traditional downswing, rotate the hips and torso toward the target. Feel the downward pressure in the feet moving into the left heel. Finish in balance, up on the toes of the right foot. 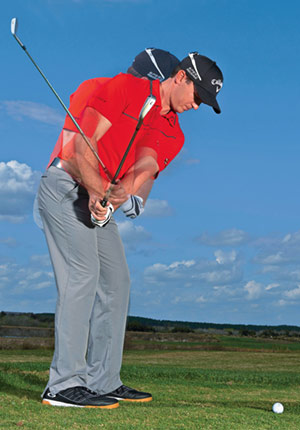 Instructors have been forever telling golfers they should keep the club on the same plane going back and coming down to hit solid, straight shots. I believe this is too difficult for most people to do on a consistent basis. It’s much easier to go from a steep swing plane on the backswing to a shallow one on the downswing. This notion is backed, in part, by the swings of some of the all-time greats, such as Jack Nicklaus and Johnny Miller. They had varying degrees of a steep-to-shallow move. This shape also gives the swing a great flow. The shaft drops from a steep position going back so that by halfway down it’s essentially parallel to the plane that the club started on at address. The shaft positions at halfway back and halfway down form the letter V, so I call it the V plane. Here’s how it works:

1. Swinging back, the left arm stays pinned to the torso and the right arm remains above it. The right wrist hinges the club up steeply. The left wrist remains cupped, and the right biceps pinch the right side of the chest. At halfway back, the shaft angle nearly matches the spine.

2. Coming down, the lower body glides toward the target—the first move down—which helps the club fall onto a shallower plane. Then the torso rotates forward and the right elbow drops toward the right hip, setting up the most solid strikes of your life.

2. David Leadbetter’s A Swing: The Setup
The A Swing starts from a fairly standard setup. One difference is, the right foot is pulled back, creating a closed stance.

3. David Leadbetter: The A Swing Backswing
Learn a new backswing that will put you in perfect position coming down.

4. David Leadbetter: The A Swing Downswing
A shallow downswing ensures that the club approaches from the inside, and then it’s just squaring the face to hit a draw. 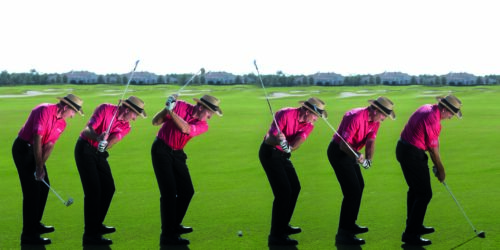 • Hands in, club is out: use your core/belly muscles to get the hands and the club moving a short distance, to where grip of club travels just past your right thigh. Your left arm should feel linked to your chest, and your hands should be close to your body.
• The clubhead stays outside the line of the hands, while the clubface looks at the ball.
• As the club is moving away, with the weak right hand grip, the right hand works inside, and you should feel that you are starting to ‘load’ the club now, at this point I’m about half of the way back. My right arm is above my left arm. Again, no forearm or clubface rotation.
• Now, complete the backswing motion with an upward spiral coiling of the body. The left arm stays nicely linked to your chest, while the right bicep pinches your right pec here. Then just wind it all up.

• Maintain the connection between your left arm and chest all the way to the top. The result will be a fully loaded backswing, with a short arm swing, while the club appears slightly across the line. The left arm lies under the shoulder plane.
• Starting the transition, the lower body moves towards the target just as the upper body and club are completing the backswing. This dynamic movement gets the hands and club working on tandem with the movement of the right shoulder and elbow.
• Halfway down the plane is on the same matching plane as the shaft at address, in sync with the body. This is the key benefit; shallowing the plane is a pre-requisite to syncing the arms and the body on the way down to impact.
• Swinging down in the proper sequence gives you the best chance of releasing the club and rotating your body in sync through the point of impact. With the shaft leaning towards the target you get compression and a solid ball-turf strike.

Leadbetter says:
• The point I want to stress, working through the backswing is that, you want to feel that your left arm is really under the sternum – in other words the left arm plane is underneath the shoulder plane.
• The more you connect this, the shorter the distance the butt-end of the club travels and the more efficient you will be. One of the real facets here is the arm-swing, short and across the body, which again I have always liked.